In lieu of my normal WIAW, I am doing a What I’m Thinking Wednesday about some thoughts I’ve had surrounding food lately..prompted by a lot of stuff I’ve been seeing in the blog world. But don’t worry…if you’re here for some fabulous food pics, I’ll have those for you tomorrow. So let’s just call this WIAW: Part 1…today you get the words, tomorrow you get the pics! I’ve got a lot of thoughts so please excuse any rambling, run-ons, or discombobulation that may follow.

I’ve always been fascinated by different diet choices, why people eat what they eat (or what they choose NOT to eat), and how all these factors affect their health, athletic performance, mental stability, and simple day to day living. You may remember my ‘Focus On‘ posting series last year where I featured a bunch of the most popular diet trends and food philosophy’s in a (as much as possible) unbiased way to shed a little light on what they’re all about, if there are any positives or negatives to follow them, and how they were created and gained popularity.

It was a very intriguing series and I learned a lot of stuff about eating trends and the in’s and out’s of certain diets that I had never known before. I’ve also read numerous books (Health Food Junkies, The China Study, Forks Over Knives, Fast Food Nation, Food Ink, etc.) about similar topics to get a better understanding of what people think the ‘best’ way to eat is. Although a lot of these books can be very persuasive in their arguments for a certain way of eating, what I’ve always come away with is that in the end balance is best, eliminating whole food groups is unnecessary, our bodies really aren’t as ‘sensitive’ as we think they are, and eating moderately from ALL food groups is the best way to ensure you’re getting adequate nutrients, variety, and enjoyment from food. Sure, I’ve adopted some principles from all of the different research I’ve done, but I am always hesitant to adopt or label myself with just one style of eating because I feel it boxes me and creates food rules for what I can or should be eating. I’d rather be able to be flexible, spontaneous, and easily adapt to situations where my preferred foods aren’t available. I never want to be in a situation where I feel I “can’t eat anything”. Believe me, traveling abroad would pretty much be impossible if this were the case and day to day life would just be unecessarily stressed filled. 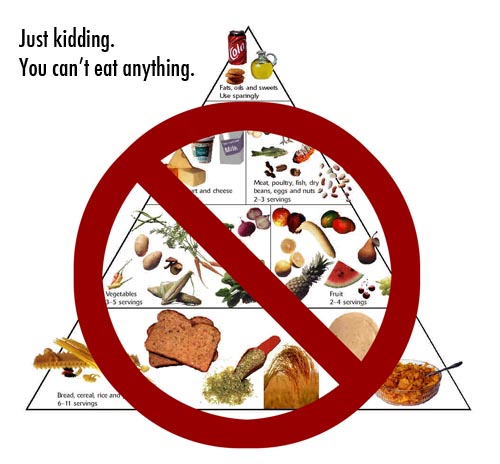 With all of that said, I understand the necessity of some people having to change their diets or eat a certain way do to health reasons. It totally makes sense. I’ve said it before and even though it’s cliche, it is true….we are all different.

However (also something I’ve mentioned before), the popularity of ‘elimination style’ diets right now (paleo, dairy-free, gluten-free, etc.) is a bit confusing to me. I think people have almost developed a hyper awareness of their bodies ‘sensitivity’ to certain foods. Up until about ten years ago, no one really focused on food allergies, intolerances, or sensitivities to the extent they do now. Most people ate without much thought (and granted this isn’t the best way to eat either)…but with less awareness and worry about every specific morsel that went into their mouths. It was a more moderate, less defined way of eating that meant moderation from each of the food groups.

But all of the sudden people began thinking of food in a negative light in my opinion. Thinking of it as the cause of tons of problems instead a necessary and viable source for tons of different nutrients. Whole food groups began being written off as ‘evil’ and symptom causing….most times without the advisement or even involvement of a doctor, just by self diagnoses and experimenting. I certainly think that what you put in your body can affect the way you feel, but I think focusing on whole foods is enough. Cutting out entire food groups seems excessive in most cases to me…and also potentially unhealthy because certain foods are truly the best source for getting certain nutrients into your diet. Sure there are other sources, at a certain point, the real thing in it’s natural form is best.

A lot of people who go on these ‘elimination style’ diets claim to have amazing results, symptom reduction, and overall improved state of well being. But not without experiencing horrible side effects at first, fatigue, cravings, and the like. Our bodies are amazing things…they can really adapt to anything. So isn’t it possible that you’re not necessarily feeling better but just experiencing your bodies adaptation to the new lack of nutrients it’s experiencing. Basically you could just be feeling better than you did when you first cut stuff out, not truly better overall. And who’s to say there isn’t something very specific causing your problems to begin with? Like one specific food rather than a whole food group? But most people never figure this out because they don’t consult a doctor! (I know some people do have the input of doctors and I see their choices as a little bit more justified since they are getting guidance and advice from a medical professional).

Just like a body can adapt to eating less calories or more calories and then learn to survive in that state, it can learn to survive in a state of deprivation from the certain nutrients that you aren’t getting by cutting out food groups. Notice how I said survive….but are you really thriving?

All these ideas make me think of an article I once read about a women who went through the process of cutting foods from her diet to in an attempt to cure some physical ailments. But she went way too far and against the advice of medical professionals and ended up becoming fairly obsessed with attaining the ‘perfect diet’ and discovering the ‘right’ way of eating. Like this woman, with enough focus and obsession on finding out how each and every food affects us, ANY food can be found to be harmful in some way. And it doesn’t help that you are bound to find some bogus study or claim that backs up these thoughts by doing a simple google search.

Another thing all these studies and claims leads to is people eliminating things just because they think they should! Not even because they are having issues. Foods that they ENJOY eating…that don’t even make them ‘”feel bad”. What’s the point?! This is a notion I definitely came across in all the research I’ve done on different diet trends. Pretty much they ALL contradict each other. What one claims as the guaranteed way to stay healthy, another claims as the worst possible way to eat.

So of course you have to find out what diet makes you feel your best, but I guess my thought on the matter is that it doesn’t have to be as complicated and restrictive as people have made it seem in the last decade or so. Simplicity and going back to basics I think could work for a lot more people if they gave it a chance and dropped the whole “my body is special/sensitive/a temple” mentality. For most of human history people have eaten the same basic food groups. Aside from the addition of processed foods in the last couple centuries , our original instincts seem to have worked pretty well. And for those of you that will say…”humans mostly ate Paleo in ancient times”… this may be true but they certainly weren’t making paleo pancakes, buying special meat products (BACON!), and only eating fruits and vegetables for snacks. They ate whatever was available to them and adapted to situations based on that. They didn’t uphold specific diet rules in spite of other things were available…like grains, dairy, LEGUMES! That last one irks me to no end….since when are beans and legumes bad for us! But enough of this before I begin to rant. I don’t want to act like my way of eating is best or that anyone really knows the ‘right’ way of eating. I simply needed to get some thoughts out and since this is a blog I thought this was the perfect forum to do that in. I’ll leave you with this last question to think about…

Is it possible that we say ‘works for us’ is really just what we make our minds believe…but not really what our bodies need?

Just some thoughts that have come up in my mind lately and I’d love to hear some your opinions on all of this. I know it’s kind of a sensitive topic for some. Especially if you’re undertaking diet changes like this right now (which I know a lot of you are!)! Know that this is not an attack on you or an attempt to criticize you. People are always going to question other people’s choices no matter what they are…and as blogger’s we are even more subjected to others peoples comments and opinions because we put more information out there for people to judge. Honestly, the way someone chooses to eat doesn’t affect how I think of them as person….it’s just one small aspect of who they are. But it does certainly bring up some issues worth discussing. I think as long as it can be done in a respectful and fair way than it definitely should be done.

Oookay. The end. See you tomorrow for some food pics.

Today’s Healthy Help: Agreed to try some products from a friend’s new company!