A unique travel guide for New York City filled with off the beaten path destinations and activities for people looking to avoid the crowds or tourist traps. 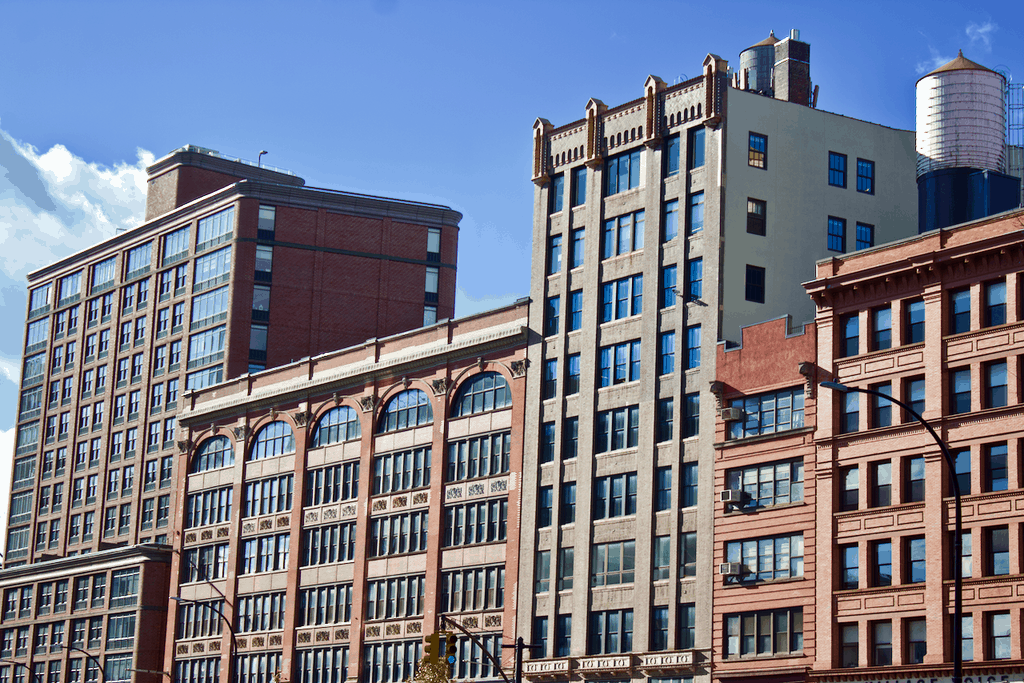 New York City is one of those ICONIC places that everyone should visit at least once in their life. It’s reputation precedes it and of course, being such a popular place, there are some MUST DO activities and MUST SEE places to visit. Especially if you don’t plan on coming back again!

For people visiting from outside of the USA, it totally makes sense to do the typical touristy things like visiting the Statue of Liberty, walking through Time Square, haggling vendors on Canal Street in Chinatown, riding the elevator to the top of the Empire State Building, going down to Rockefeller Plaza bright and early to watch the Today Show being filmed. 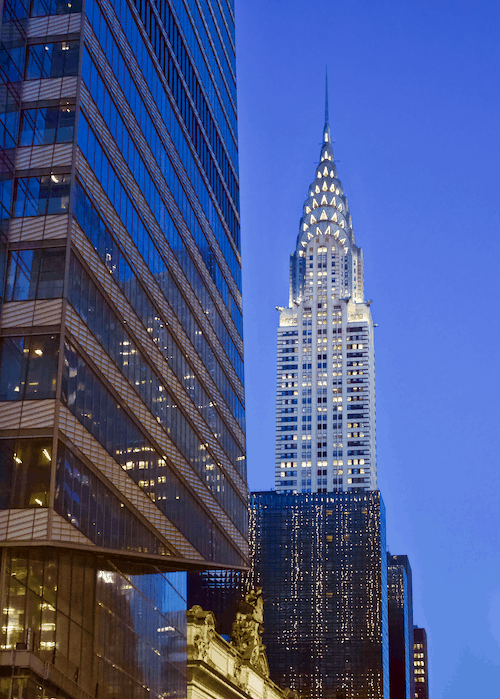 BUT, New York City is also one of those places that you can visit numerous times and always discover something new to see and do.

I recently took a trip to NYC (my 6 or 7th time to the city) and made it my mission to do some lesser known activities and visit some less popular places around the city. I personally love doing off the beaten path things when I travel and usually ask locals what THEIR favorite parts of their city are to get the insider perspective on the best ways to enjoy the area.

I’m definitely not a New York City expert, but having done all the ‘bucket list’, touristy stuff myself in the past, I was able to find some pretty cool things to do and places to see if you’re one of those people who thinks they’ve “done it all”. 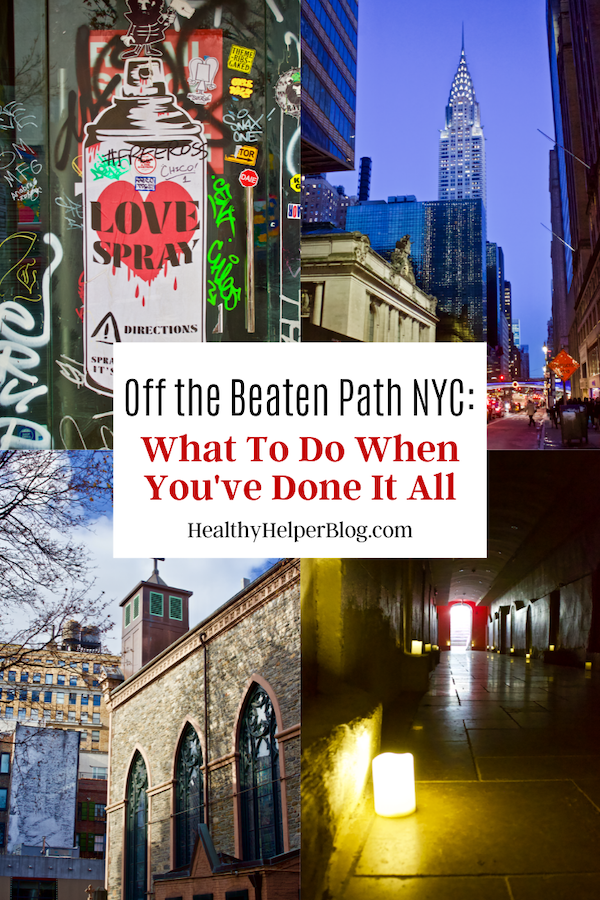 Instead of staying in Midtown…

Check out one of the other up and coming neighborhoods in the city. 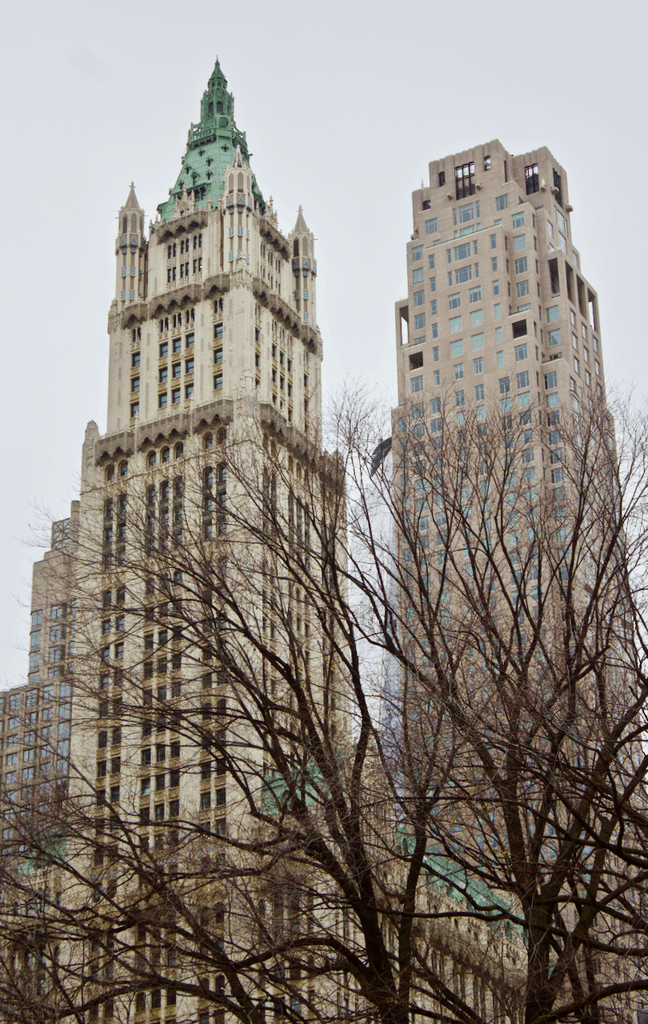 Midtown is SUPER BUSY and SUPER TOURISTY, which is fine if that’s what you’re looking for. I stayed in East Harlem near the Upper East Side while I was in town. Not only is Harlem starting to become a busier, more well developed area, but it’s also A LOT cheaper than other areas to stay. Another bonus? It gives you a really cool perspective on how much the city can change within just a few blocks. I walked about 100 blocks from my AirBnB to a coffee shop I wanted to check out one morning and was mesmerized by the changing landscape, architecture, and luxury as each block passed. 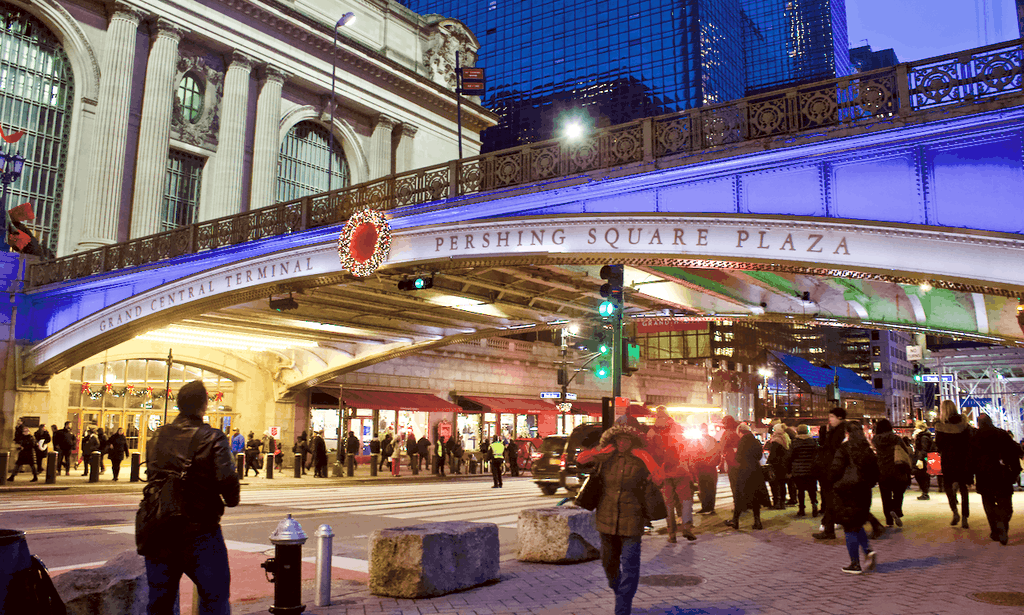 Another tip, skip the overpriced hotels and opt for an AirBnB or VRBO!

Much cheaper and usually awesome accommodations. Plus you get that real NYC feel embedded in your stay!

Instead of a Broadway show…

Try your luck with Broadway Roulette!

One of my favorite parts of coming to the city is the accessibility to theatre. If you’re new here, you may not know that I acted professionally in my hometown from 7-17. I also grew up going to plays and musicals monthly. So needless to say, I LOVE theatre and seeing Broadway shows is a total joy for me. 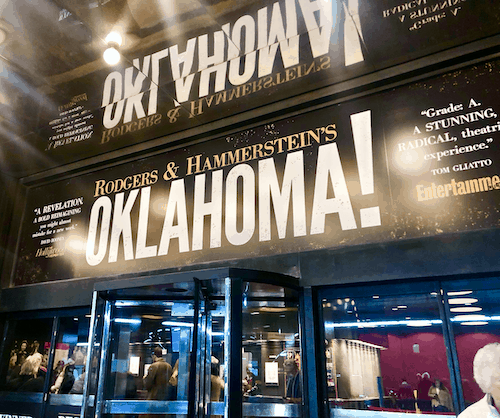 Broadway Roulette is great for someone who has seen a lot of shows and would really be happy seeing anything on Broadway.

You head to their website and buy a ‘ticket’ for a specific date (prices vary slightly depending on where you want to sit).

You then are given a list of all the shows currently running on Broadway and are able to cross of 5 shows or musicals that you DON’T want to see. I mostly crossed off shows I’d already seen.

Then you wait. On your selected day, the roulette wheel is spun and you get an email around 9am telling you what show tickets you’ve scored! I got to see the Tony Award winning musical Oklahoma while I was in town. It was AMAZING!!

OR see an off-broadway show!

I went to see The Office: The Unauthorized Musical Parody at the Theatre Center and had such a great time! Yes, it was very low budget compared to a full scale Broadway show, but as an Office superfan, it was hilarious and the cast was awesome. And remember, a lot of hit Broadway shows got their start off-broadway, so you may be seeing the next MEGA HIT for super cheap!

OR go to a taping! 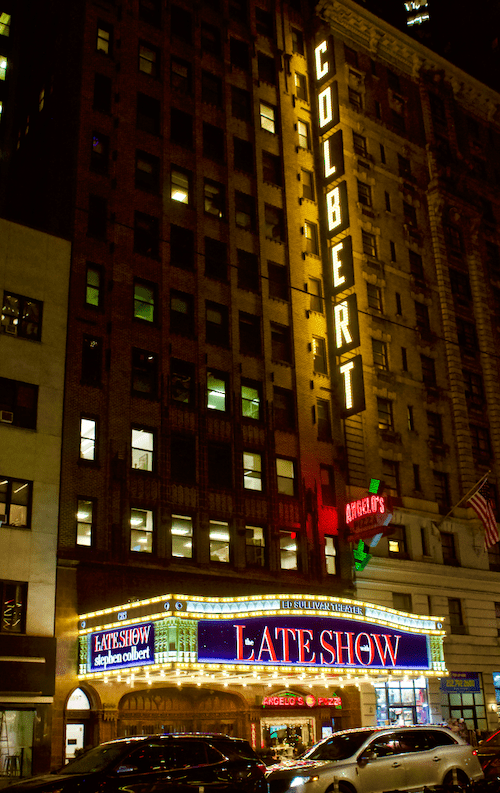 NYC is a hotspot for late night shows…so if you know the dates of your trip a few months in advance go HERE and reserve tickets for one of your fave shows. It’s FREE and a super cool experience. I went to see The Late Show with Stephen Colbert and had a great time. Look out for a post coming soon about what going to a taping is ACTUALLY like. 😉

Instead of a double decker bus tour… 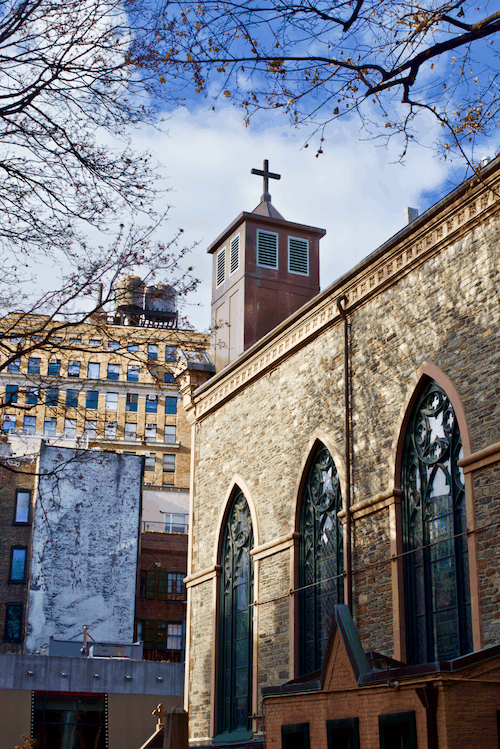 NYC has so many cool historical gems scattered throughout the city. So why only learn about the most well known spots on one of the overcrowded double decker bus tours? 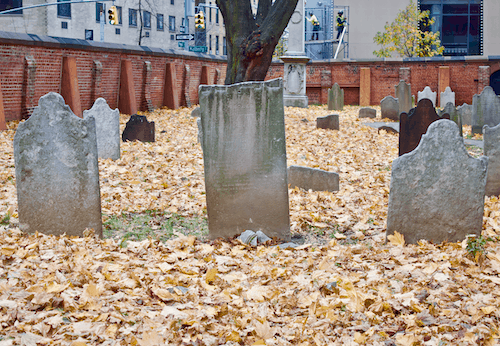 On this trip, I saw a Facebook ad for a candlelit catacombs tour underneath the original St. Patrick’s Cathedral. Did you know there were two!?

I decided to be spontaneous and book the hour and a half tour. It seemed super different and out of the ordinary, so why not? 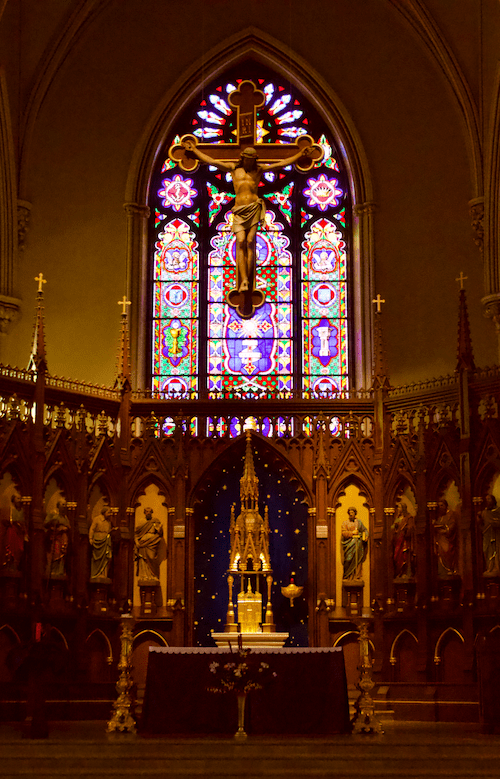 Tommy’s New York has exclusive rights to guide tour groups through (and underneath!) the Basilica at Old St. Patrick’s Cathedral on Mulberry Street (a very cool area of the city as well!). Before heading to the catacombs themselves, you’re taken through the outdoor cemetery that surrounds the building. It’s filled with dozens of 200+ year old graves and the tour guides share a ton of interesting history about the neighborhood, why there’s a tall brick wall surrounding the cathedral, and even tidbits about some of the permanent residents. 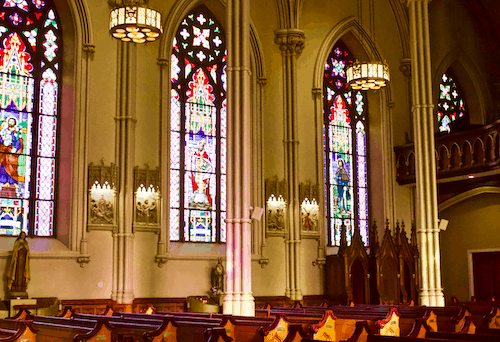 As you begin to enter the cathedral and explore the upper level, you learn that the cathedral was the largest in the United States when it was finished in 1815. It was also the seat of the first bishop of the Diocese of New York. The church itself is beautiful with tall, colorful, intricate stained glass windows and the original organ still intact.

Then you head down stairs where the catacombs are. You learn about the renovations that have been done on the building and the ongoing preservation efforts. Then, you’re lead through a large wooden door and stone entryway into the catacombs themselves. 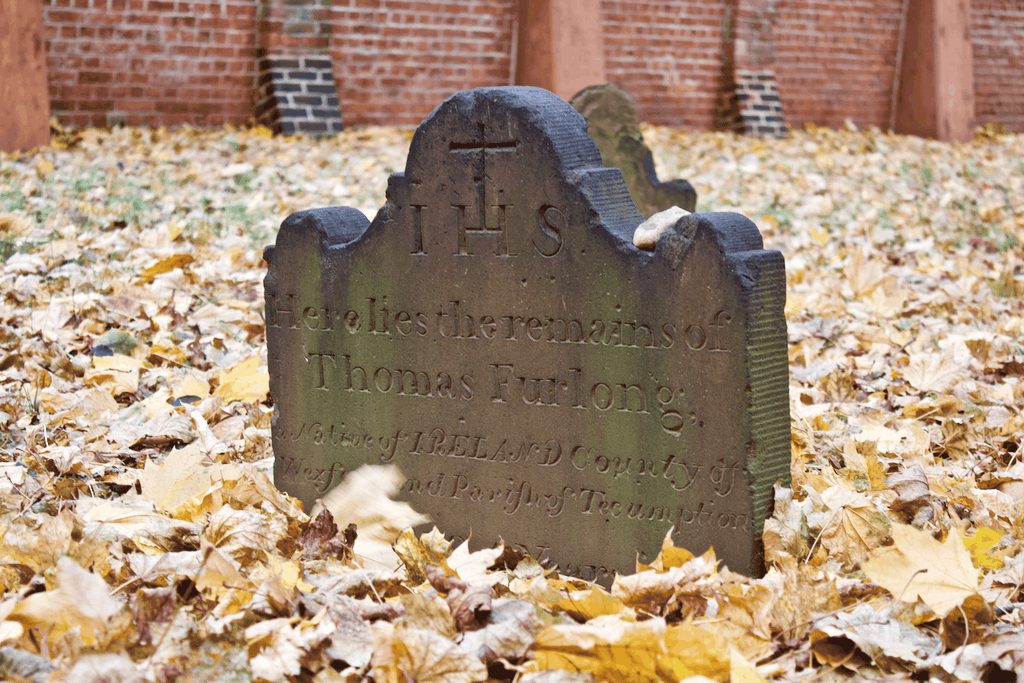 Darkly lit and very well maintained, there’s a long corridor with grave markers for the families or individuals buried there. In total, there are 5 priests, 2 bishops and 33 families were buried here. You learn history and details about all the people buried there as well information on how the catacombs were built, including the most opulent one belonging to General Eckert. His walk-in crypt cost $83,000 back in the early 1900s (which would be more than 2 million dollars today). 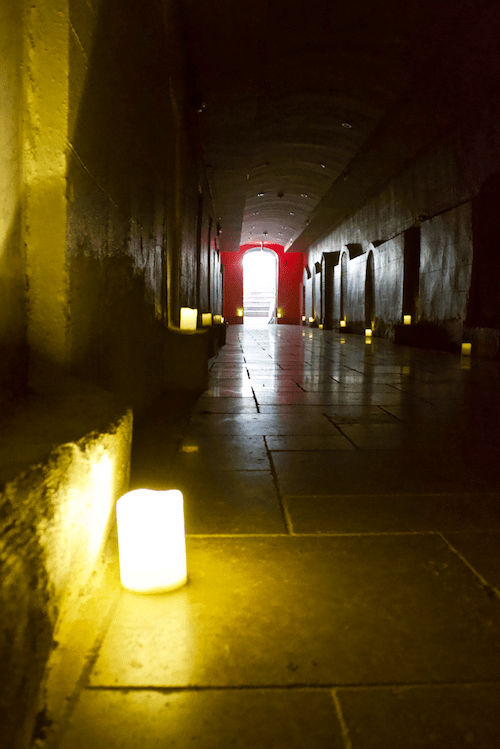 Overall, a super cool tour and there’s NOTHING else like it in the city! This history nerd approves. 🙂

Instead of overhyped diners and pizza spots…

Experience all the different cuisines the city has to offer! 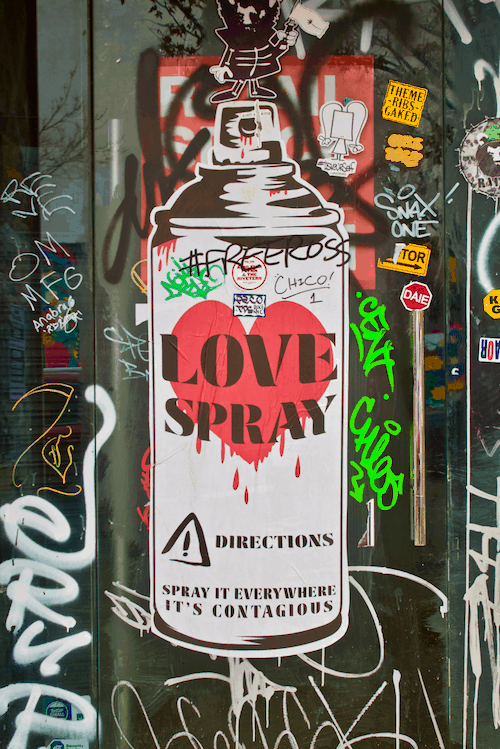 They don’t call it the melting pot for nothing. Skip the lines at diners around Time Square and visit some interesting, new-to-you eateries…some favorites include:

The MasalaWala– a hip cozy place for killer Indian food with a twist!!

Also, check out the large and varied health food scene.

Some of my favorite unique vegan/health food spots are:

Beyond Sushi – VEGAN sushi!! Such creative combinations of ingredients too.

A few coffee shops to check out:

Instead of walking the Highline…

Walk across the Brooklyn Bridge and explore all that Brooklyn has to offer. 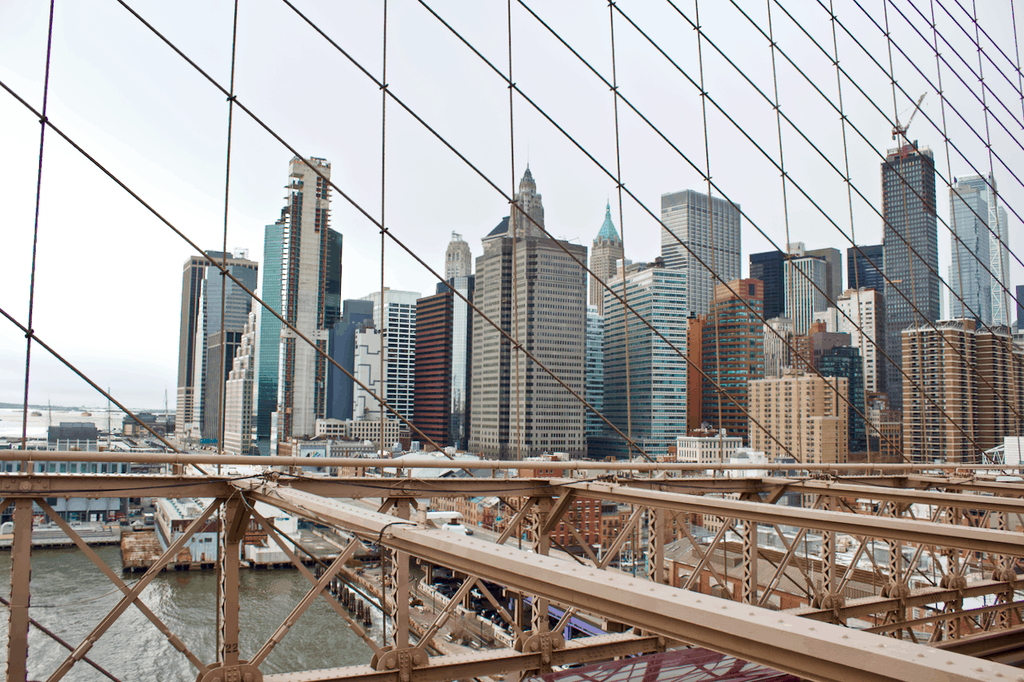 Walking over the Brooklyn Bridge is sort of a bucket list item…BUT if you do it in the early AM you’ll catch it with almost NO people there. Great opportunity for pictures and for enjoying the walk over itself! Plus, Brooklyn itself is a total hotspot nowadays and has more of intimate, quaint feel than big, expansive, busy Manhattan! Spend at least a half day exploring the different neighborhoods in Brooklyn, going in cute shops, and trying some cool eateries. 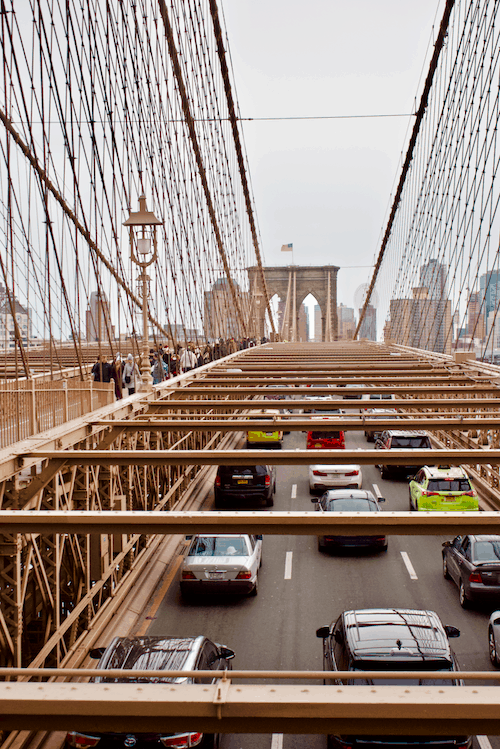 Instead of clubbing or bar hopping…

Don’t let the price of Sleep No More at The Mckittrick Hotel stop you from buying a ticket…drinks in NYC are pricey! So skip the bars and do this unique, once in a lifetime immersive play instead. 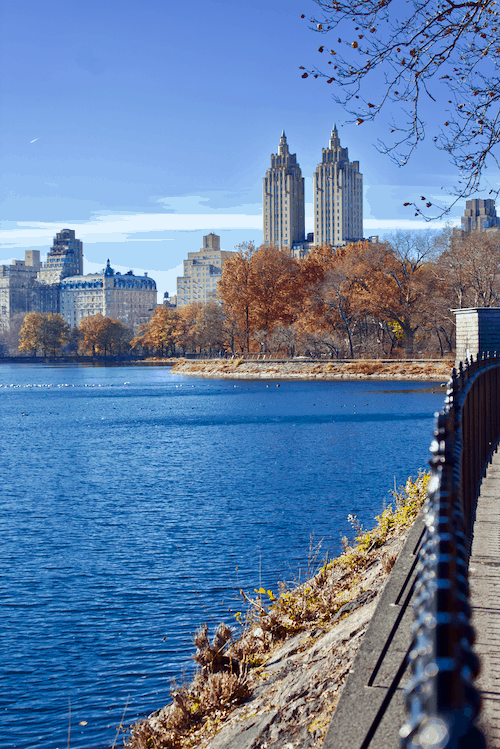 Sleep No More is a SUPER hard to describe even after you’ve experienced yourself. But essentially it’s an interactive, film noir version of Macbeth that takes place in a 5 story old time hotel. Everyone has to wear masks (yes the audience too!), you’re encouraged to make your own way (AKA not stick with who you came with), and there is NO talking (not even the actors!). When you enter the experience, it feels very haunted house-eque. You’re able to explore the entire space, all the rooms and different settings…you can even touch the props! Everything is super intricate and detailed. Eventually you’ll find a character and you sort of stick with one of them for the duration of the 2 hour experience. They will act out their own scenes, interact with other characters, and even with some audience members all while leading you up and down stairs and ALL around the hotel. You get that character’s perspective of the story and goings on in the world of the play, but Sleep No More is a play you could see several times and never get the same experience twice since there are so many different characters to follow!

I actually did a little research after the show about the other characters stories and background since I stuck with one the whole time and realized I only SCRATCHED THE SURFACE of the story as a whole.

Totally something I would do again and HIGHLY recommended!

Instead of a Central Park pedicab tour…

Walk around the perimeter of Central Park! 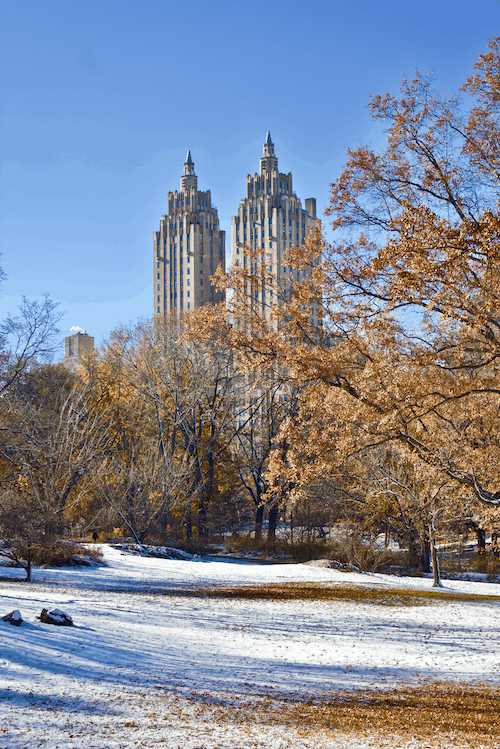 Central Park is one of my FAVORITE places in the entire world. I can (and have!) spent hours there. 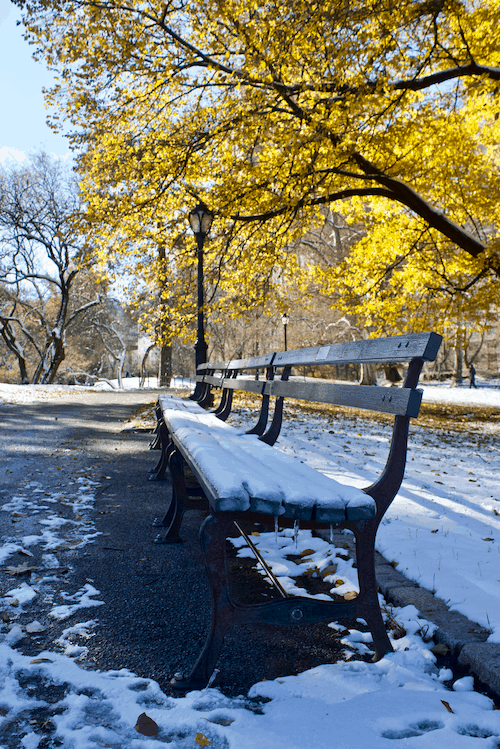 There’s so much to see and do, no matter what season it is, and the pedicab or bike tours only scratch the surface. So my recommendation? Block out a few hours and walk the perimeter of Central Park to really grasp it’s vastness. And don’t be afraid to venture inward as well of course! 😉 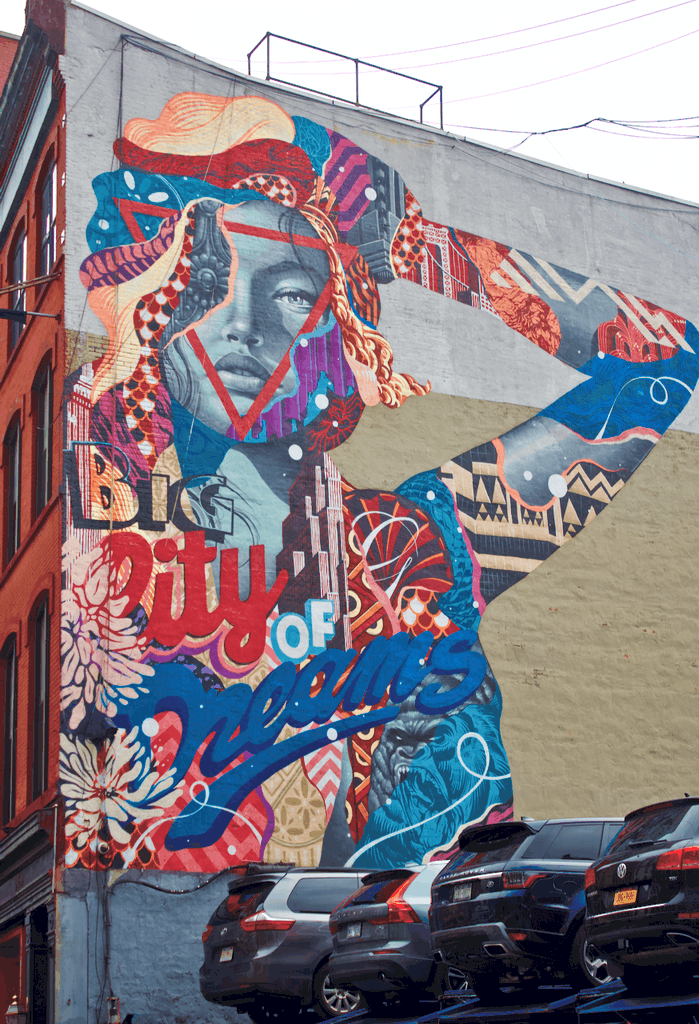 NYC is a haven for unique and boutique fitness classes! Skip the gym while you’re visiting and instead, try out one (or several of the cool fitness classes all around the city. There’s something for everyone; from adult jungle gyms to intense reformer pilates classes and everything in between. Two of my favorites from my most recent trip were:

Mile High Run Club – a mixture of speed or endurance intervals with hills, resistance, and sprints mixed in depending on which class you do! Awesome way to mix things up if you love running but need to break out of your normal routine. 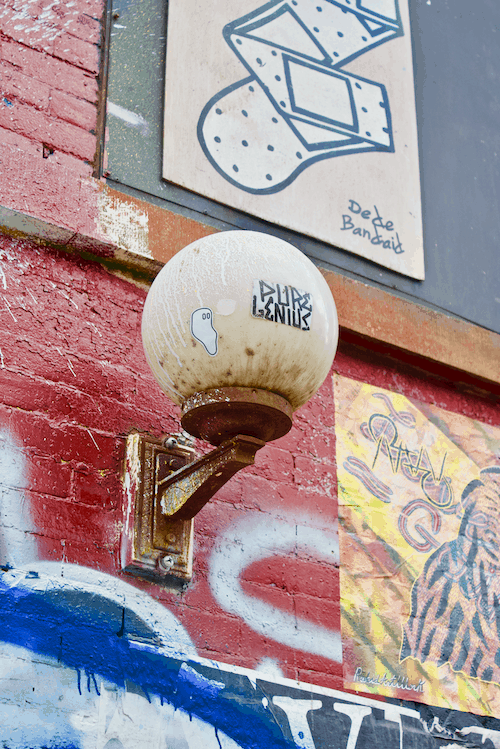 Off the Beaten Path NYC: What To Do When You’ve Done It All #newyorkcity #travelguide #visitNYC

Have you been to NYC before?

What are you favorite things to do there?

2 responses to “Off the Beaten Path NYC: What To Do When You’ve Done It All”