Recently I’ve come across a ton of interesting articles, blog posts, and news stories about some different topics in health, food, and body image that I’ve been really wanting share. I honestly could write a post on each of these topics on their own, but ain’t nobody got time fo’ dat! <—Or at least a busy college student doesn’t! 😉

So think of this as your ‘need to know’ newsfeed for all the things that have got me thinking lately!

–Articles about dieting, counting calories, or being restrictive featuring women that clearly do not need to be watching their weight. More specifically this one…

Recently spotted in my Self magazine, I was shocked (but I probably shouldn’t have been) that an article talking about cutting 2000 calories from your diet featured such a thin, petite model! What kind of message is this sending to impressionable readers?! “Well if she needs to watch what she eats, then I certainly do, too!” WRONG. It’s features like this that skew people’s perception of size, weight, and what they ‘should look like’. So harmful.

As I’m sure you’ve heard, the FDA will be rolling out new and improved nutrition labels sometimes within the next year or two. Some changes include more visible, prominent calorie counts, more realistic serving sizes, and, what I think is the best alteration, an indication of ADDED sugar. I think this change is great because sugar is often times what people are least aware of in the foods they’re eating. They tend to look at calories and fat or reach for low-fat, diet products (which often time have even more sugar to make up for the lack of other nutrients!)  and then overlook the amount of sugar that has been added to the product! I also think it will be good for products like dairy that contain natural sugars and can be confusing to some people who aren’t well informed on the difference between ‘natural’ and ‘added’ sugars. I can’t tell you how many times I’ve had people say to me “well that yogurt/fruit product/other naturally sweetened product isn’t healthy” just because it seemingly has a lot of sugar…when in actuality it’s naturally occurring sugar and is good for you! Not all sugar is created equal (take a larabar vs. a snickers bar for example!) and I think the changes to the nutrition labels will be a good step in making the public more informed, educated, and aware of their food choices!

I recently watched a segment on The Doctors about the possible creation of a ‘plus sized’ Barbie. Nothing is inherently wrong with this but the extremes to which the doll went to convey its bigger size verged on unhealthy in my opinion. The doll was clearly made to look obese and I just don’t understand the point of this. Barbie promotes unrealistic and unhealthy expectations for a woman’s body as it is, so why go from one extreme to the next? Whether the body of the doll is overly thin or too overweight, the brand is promoting unhealthy perceptions of what a body should look like. I totally understand wanting to promote beauty at every shape and size, but why sacrifice health to do so? Beauty and health are mutually exclusive and I don’t think that participating in the ‘love your body’ movement should mean having to promote states of being that are unhealthy. On either end of the spectrum, whether the Barbie is its usual size or in the new obese model, it’s promoting an unhealthy view of what a body should be. On one side it’s normalizing an underweight physique and on the other it’s saying that being obese is okay! I say children’s toys should shift their focus towards advocating HEALTH rather than beauty!

–Paleo Diet…not all it’s cracked up to be? 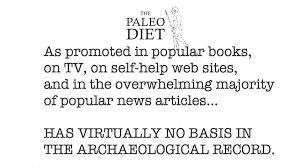 I have never been a fan of diets that restrict entire food groups and I’ve shared my thoughts on the Paleo diet’s restrictive nature in the past. Recently, I came across two fascinating articles that convey my thoughts on the diet much more eloquently than I ever could and offer a scientific basis for why the diet may not be as healthy, ‘pure’, or ‘ideal’ as it’s touted to be….

The paleo diet isn’t necessarily ideal, an evolutionary biologist says– This article highlights the fact that it’s not true that are bodies haven’t adapted overtime to need different nutrients and more diverse food groups such as grains, fruits, and legumes. The Paleo diet operates on the basis that we should be eating the way our ancestors did when in fact our genes have changed over the past 10,000 years. Not only this, but we cannot definitively say that we know what are ancestors were eating in ancient times. There is evidence that they were eating a lot more carbohydrates than the Paleo diet would lead you to believe and that our foods have changed so much that it is nearly impossible to ‘eat like a caveman’. The idea of it is idilic but not realistic and certainly not the perfect human diet.

How to Really Eat Like a Hunter-Gatherer: Why the Paleo Diet Is Half-Baked– This article was SO INTERESTING! I loved all the information it presented and it really made a ton of sense about how the Paleo diet oversimplifies the idea of a primitive diet. While the Paleo diet gets one thing right, cutting down on processed/junk foods, it doesn’t take into account the lifestyles of the people that were eating in the ‘paleo style’. Heck, most people in that time period didn’t even make it the age of 40! This article, like the other one, also suggests that humans were eating grains and dairy far earlier than we once projected. It goes on into great detail about several ‘paleolithic diets’ from all over the world and demonstrates that fact that the Paleo diet of the modern world is no where near as versatile and flexible as the REAL paleolithic diets. There really is no one ancient group that can be documented as eating exactly like today’s Paleo diet and in fact most groups ate meat only when it was available…not as a staple. Here is my favorite excerpt from the article:

“Our species was not designed to subsist on a single, optimal diet. What is remarkable about human beings is the extraordinary variety of what we eat. We have been able to thrive in almost every ecosystem on the Earth, consuming diets ranging from almost all animal foods among populations of the Arctic to primarily tubers and cereal grains among populations in the high Andes.”

The latest in health news! Check out @healthy_helper ‘s thoughts on the trends!

Any thoughts on any of these hot topics?

Do you think the new nutrition labels will make a difference?

Are you a proponent of Barbie, the original or the ‘plus-sized’ version?

Do you think the Paleo diet is realistic or just an ideological movement that masks restriction behind ‘health’ claims?

Todays’s Healthy Help: Held the door for a big group at the gym!

Never too early to start Lending a {Healthy} Hand for this week’s round-up! Tell me what you’ve done to help someone else lately!

15 responses to “In the Media: Health Trends”