As I mentioned in this past weeks Rant and Raves post, I’ve been thinking a lot about ‘intuitive eating’ lately and how it’s gained popularity in the blog world. After getting some feedback from all of you and some encouragement to write a whole post on my thoughts, I decided to do just that….

It’s no secret that trends and fads are constantly circulating through the blog world. Every few months or so, it seems that the majority of bloggers are all involved in the same fitness regiment, following the same diet, or buying the same products. A few that I’ve noticed over the years in regards to food and exercise: the body pump craze, gluten-free, paleo, physique competitions, measuring macronutrients, the stevia obsession, cross-fit, high protein-low carb….and most recently intuitive eating.

Seems like it shouldn’t be a trend, right? It should just be what people do naturally? Well, yes, you would think intuitive eating would be the epitome of ‘normal eating’, but sadly for the blog world, it seems like it’s become another obsessive fad that requires an extreme amount of focus and hyper diligence on what you’re putting in your body.

Having previously used food as a means of channel my anxiety, I know how controlling certain aspects of your life can make you feel more stable and calm. So it makes sense that restrictive diets, harsh exercise regiments, and super strict food philosophies can take hold in people’s lives. Since this new trend of intuitive eating has come along, with pillars of ‘satisfying cravings’ and ‘listening to your body’, I feel that people are just using it as a label to mask the same old habits that they’ve used to control their diets in the past. Almost as an excuse to continue with disordered eating, but with the guise of truly honoring one’s body.

Let’s be real though. If it takes tons of mental energy and cerebral pondering just to figure out what your body is ‘craving’, then you’re truly not listening to your body. You’re over analyzing and digging yourself into a deeper hole.

And frankly, I think the word craving is way OVERused and MISused in the blog world. The definition of a craving is:

Now I don’t deny that as humans we do sometimes feel a “powerful desire for something”…even a food! But trying to figure out our craving EVERY MOMENT OF THE DAY?! That seems a little overboard. We’re not always yearning for something specific. Heck, our bodies just want food…nutrients….fuel! Whatever you want to call it. These so-called cravings are mental…our bodies will realistically take any source of energy they can get. [Granted, nutrient dense foods can be used most efficiently by the body]

Also, for most people intuitive eating (taking it in the sense that most people have been using it: that you go with whatever your body wants at all times during the day) would most likely not be sustainable and could be unhealthy. 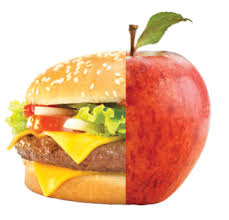 Maybe you’re not very hungry, but not eating all day is not good for your body. Or maybe all you want to eat is celery or just fried chicken…choosing to eat only certain foods and cutting out others for the sake of ‘honoring your body’, is in fact harming your body. Eating appropriately and normally is a combination of listening to what your mind wants and choosing things that your body needs. Cus sure, everyone might want to eat fried foods and cake all the time but you certainly wouldn’t be able to lead a very healthful, fulfilling lifestyle by only feeding your body with those foods. Same goes for people who restrict and only eat low calorie diet foods or veggies all the time.

True intuitive eating, in my opinion, requires no thinking, contemplating, or listening…it just involves eating. Simply choosing food based on what sounds or looks good, what is good for your body, making quick decisions, and not long drawn out processes of figuring out if you’re “feeling” blueberries or apples at the moment.

I think intuitive eating has more to do with listening to hunger cues and not depriving yourself or overstuffing yourself. I think it has little to do with trying to figure out ‘your needs’ on a daily basis or what specific food you’re going to eat.

The New York Times wrote an article on Normal Eating. Here’s what ‘normal eating’ is defined as…

To me, normal eating and intuitive eating should be interchangeable. But as I’ve seen and mentioned, it seems as if it’s turned into yet another ‘style’ of eating within the HLB world. I’m led to believe this because a lot of the ‘intuitive eating’ I’ve seen on blogs all tends to go towards the same food groups and even the same exact foods. How can EVERYONE who is all of a sudden eating intuitively be wanting the same exact foods? Seems more like the band-wagon effect than true normal eating. There are no HUGE changes from the people’s previous diets…just more justifications for what they were already eating.

And just like a typical diet or food philosophy, the intuitive eating that is making its way through the blog world seems to come with a set of rules. Rules, that if not followed, could create guilt and negative feelings just like deviating from other diet plans would. So now, instead of eating outside of Paleo diet [or insert other diet here] restrictions, not eating EXACTLY what you think you want could cause stress and anxiety as well. As if you’re depriving yourself or not honoring your body. Catch 22, eh? What it all comes down to is that people have become too preoccupied with labeling their diet in someway and making it fit into a neat little box or perfect category. As if just eating and not publicizing it to the world or having to explain each choice you make in regards to your diet makes you lesser. Point blank…it doesn’t.

I hope that this post can start an open dialogue about this topic as I’ve received some comments from people who feel similarly to me, but I would also like to here some other perspectives and opinions on this topic. As always, thanks for indulging my wall o’ text!

In all honesty, focusing on food so much has long dropped in my list of priorities. Of course I love food…coming up with recipes, cooking, eating fresh, flavorful meals, and even checking out what all of you are grubbing on (did I really just say grubbing on?). But working on projects like the Lend a {Healthy} Hand movement and making society all together healthier and happier are more important to me now. Just a shift (a positive one!) in priorities, I guess!

Speaking of Lend a {Healthy} Hand! Remember to submit your #healthyhelp for tomorrow’s round up! And don’t forget to enter my Simply Bar giveaway if you haven’t already!

See you all from the West coast!

Todays’s Healthy Help: Shared a workout I was doing at the gym today with one of my fellow gym goers.

Never too late to start Lending a {Healthy} Hand for this weeks round-up! Tell me what you’ve done to help someone else lately!

24 responses to “Intuitive or Forced?”