Netflix instant streaming is my best friend. It’s pretty much the only way I can catch up with all the amazing shows and movies people are always suggesting.

I am a documentary lover and Netflix has this cool feature where it suggests things for you based on what you’ve watched in the past. So as I was flipping through the documentary suggestions I came across one called America the Beautiful.

It actually sounded familiar and after reading the info on it I knew I had to watch it. Here’s the synopsis straight from the movie’s site:

The United States of America is known for being one of the wealthiest nations on the planet with the most opportunities for its citizens. In 2004 alone, Americans spent $12.4 billion (yes, billion!) on cosmetic surgery. With such an abundance of wealth, why are Americans so discontent?

Too much television and easy access to plastic surgery are conventional answers, but they do not fully explain this national psychosis. These same images are found all over Europe and Canada, yet their citizens do not have this same obsession.

In almost 40,000 media messages a year, youthful Americas are being told that, unless you look like supermodels and rock stars, you’re not good enough for anyone to love. This is a message that too many people are buying.

The hope of achieving these ‘ideals’ has consumers purchasing cosmetics, toiletries, fashion and plastic surgeries at increasingly dramatic rates. Has the ‘American Dream’ changed so much that it can only be achieved once we can perfectly emulate the super thin and sexy images of Britney Spears or other pop icons?

Filmmaker Darryl Roberts goes on a two year journey to examine America’s new obsession; physical perfection. In America the Beautiful, we learn secrets, confessions, and strikingly harsh realities as Roberts unearths the origins and deadly risks of our nation’s quest for physical perfection.

In America the Beautiful we see how these increasingly unattainable images contribute greatly to the rise in low self-esteem, body dismorphia, and eating disorders for young women and girls who also happen to be the beauty industry’s largest consumers. Who actually benefits from this high-priced journey towards this ideal? Is corporate America’s bottom line so important that it justifies a nation’s psychosis? What are the true costs of our obsession with youth, beauty, and a slender physique?

At the heart of “America the Beautiful” is the story of Gerren Taylor, a teenager who went from being an innocent 12 year old girl to being one of America’s next top supermodels. As she and her mother head down the windy road to stardom, viewers watch the dichotomy between Gerren’s adolescent struggles and her adult “rights of passage” on the catwalks of Marc Jacobs, DKNY, Tommy Hilfiger and other top designers. Her tumultuous quest acts as a mirror to the American psyche, and it becomes apparent how the same beauty that could jump-start her career could ultimately destroy her young life. 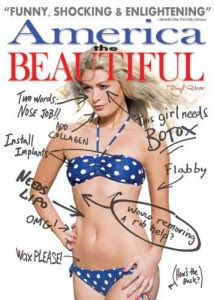 (I have written about this type of subject matter before and have always had strong convictions about how our country’s priorities have taken an unhealthy shift towards superficial, unimportant aspects of who we are as people. Check out some my other Body Image related posts here!)

Well the synopsis has nothing on the actual movie. Filled with stats, candid interviews, and perspectives on beauty from all walks of society, it is absolutely astounding to see how vain and superficial we’ve become as a society.

Not only are we obsessed with a certain standard of beauty, but as a culture are view of what’s accepted and “right” has become incredibly corrupted by years of poisoning by the “influential” people in our society.    For some reason a select few have determined what should be seen as beautiful and what people should strive to look like. Now more than ever people are dieting, over exercising, degrading themselves, getting surgery, comparing, and feeling bad about WHO THEY ARE just because of what society says they should be.

Whatever happened to the old cliche of “what’s on the inside counts”? As cliche as that is…its true. Beauty, outward appearance, and materialistic prowess is fleeting….your actions and the impact you make on others are whats important.

There is SO much I could discuss about this film. Literally I could go on for hours about how skewed our priorities have become…but I’ll spare you from all that text and just suggest that YOU WATCH THE MOVIE. Everyone should see this movie and then take a hard look at how you feel about yourself and what’s really important in your life.

I do however just want to mention the three scenes that stuck out the most in my mind and really made me think:

1. A feminist playwright discussing how women in our society are unable to love their bodies compared this negative perception with how a woman she met in a third world country viewed her body. The woman boasted about how her body was strong…how her legs carried her to the stream to fetch water, how her arms allowed her to complete her work for the day, how her stomach was sexy and that she wished she could show it off all the time. The playwright told her friend that she was unable to do this…how she was mentally incapable of loving her body. The indian woman couldn’t believe this! In her society the human body is worshipped! It is appreciated and revered for everything it can do. She goes on to say that just as we wouldn’t compare one tree with another, we shouldn’t compare our bodies with other people’s. It doesn’t matter whether that tree is taller than another or has a wider trunk…the simple fact is, we are all trees!

[Here is a link to the video if the above version doesn’t work for you!]

2. In another scene, we hear from a high school teacher who has sponsored the installation of a class bulletin board project she calls “the great wall of porn.” The name seems a little risque in the context of a school environment but the teacher was trying to demonstrate that the advertisements in magazines and newspapers nowadays might as well have come from a porn magazine.  The class created what the teacher a large bulletin board where they posted cutouts of sexual images from print advertisements. Images that, the teacher and students say, blatantly sell sex instead of a product, especially since, as the teacher points out, sometimes a product isn’t even present in its ad. The theme throughout? Scantily clad women, seductive facial expressions, suggestive positions, and the promotion of a certain body type and ‘look’. And the sad part…these images are seen everyday by MILLIONS of people….including kids who are particullarly susceptible to this type of marketing. We as a society know that “sex sells”…but why should our bodies be so instrumental in what we buy, how we dress, how we act, what we watch, who we associate with, what our job is…EVERY DECISION IN OUR LIVES. The easy answer? They shouldn’t. Physicality and outward appearance need to be knocked waaaay down on the totem pole of what’s important in our lives.

3.  Towards the end of the movie, the director interviews a woman from a well known eating disorder clinic. She makes one of the most haunting statements in the entire film…I am paraphrasing here but this is the gist of her comment: “If someone from a future generation looked back on our society, they would be appalled. Appalled that we are paying models hundreds of thousands of dollars to be underweight, unhealthy, and to promote unattainable body ideals, while at the same time people in the same state of health are being put into treatment for eating disorders for the same enormously high amounts of money.” Such a backwards notion.

I am incredibly passionate about everything this documentary promotes. I applaud Darryl Roberts and his crew for shedding light on such an important issue in our modern world.

I highly (HIGHLY!) suggest you watch this documentary and the sequel to it, America the Beautiful 2: The Thin Commandments.

Have you seen either of these documentaries?

Do YOU think America (and the world in general) has become overly obsessed with “beauty”?

Thanks for letting me get out my thoughts on this topic! I know its not easy to make it through these wordy posts sometimes, so I’ll be back tomorrow with a little surprise for you all! Smells like a giveaway up in here! 🙂

Today’s Healthy Help: Helped a biker change their flat! Learned how to do it when I was on my bike trip…comes in handy! 🙂