For those of us that have gym memberships, we all get used to the group of people who are at the gym around the same times as we go. You start to see the same people day after day and get familiar with their little routines and quirks….as I’m sure they do ours as well.

After seeing this funny post on Buzzfeed the other day, I got inspired to make my own list of people you meet at MY gym!

All in good fun, friends! Just wanted to highlight a few of the more….unique regulars that I come in contact with when I head to my gym.

Blazers, long flow-y skirts, dress pants, and button downs….this lady has been seen wearing everything but a formal ball gown on the arc trainer! She seriously must come straight from work, doesn’t even put her hair up, and just changes into sneakers before hopping on a machine. Now don’t get me wrong, I give her props for working out. But I would not want to be stankin’ up and wearing out all my nice work clothes. But hey, ya do what ya gotta do! Can’t be too comfortable though to be sweating in all those heavy fabrics, though!

He? She? Cannot tell for the life of me! This person clearly has some boobs, wears breast cancer awareness BOOB shirts, as well as highlighter colored running shorts and bandannas, but when he/she speaks its like a baritone opera singer! They are very nice, but I just can’t tell what gender they are! Well, which ever, they know how to put mascara on fairly well! Makes me think of Dr. Frank-n-Furter from Rocky Horror! (Did you know it’s one of my favorite movies?!) 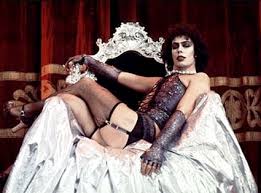 The Burn After Reading Runner

Please tell me you know what I’m referring to here!

In Burn After Reading (another one of my favorite movies!), Brad Pitt plays an overly enthusiastic trainer who runs on the treadmill with all out arm motions, flailing, and fist pumping. There’s a dude at my gym that could be Brad’s clone. He goes all out like he’s at a rock concert while pounding away on the treadmill. And I mean pounding! Not just his arms but his feet too! Lots of noise when he’s in the room.

This is my version of the gym ‘creeper’. This guy is the old dude that comes in wearing shirts with inappropriate phrases and jokes on them, lurks a little bit too long behind women running on the treadmill, and tries to strike up uncomfortable conversations while you’re cleaning up equipment or getting ready to head into the locker room. He also wears abnormally short shorts. Just sort of amplifies his creep factor. Any LOST fans out there? If so, get ready to be majorly jealous. There is a man who looks JUST LIKE Desmond from LOST! Perhaps even more charming? 🙂 I kid you not. And not only is he nice to look at but he works his butt off too! Handsome and in shape….don’t mind if I do. He’s totally got that long flow-y hair look going on. This guy….yes GUY, is a whiner to the extreme! Not only does he spend HOURS at the gym, switches machines like crazy, and is an all around spazz when interacting with others. But he basically throws a hissy fit if he can’t use the equipment of his choice (like if it’s already being used) and walks around swearing under his breath and stomping his feet like a 4 year old. The only time I’ve ever seen him somewhat calm and serene is when he’s belting out lines from Lady Gaga songs while watching his weight lifting form in front of the mirrors. Though I can’t be too sure if he’s just looking at himself or his form. 🙂

Pretty self-explanatory. But this guy is ALWAYS drenched. From the minute he gets there. I can’t judge because I am a heavy sweater too, but I prefer to be coated in my own sweat, not that of others. And with this guy, if you’re in a 5 foot radius of him while he’s on a machine, be prepared for some spray. Nastaaaaay.

Phone it in Francine

Not only is she literally on the phone the WHOLE time she is there (thanks for letting me hear about your mother’s cousins boyfriend problems), but she literally goes as slow as human possible on the elliptical. Might as well be standing still! It wouldn’t be so bad if she wasn’t always there during the gym’s busiest hours….basically when noise is at its peak and there are lines for machines. So to see someone who’s not really using them to be hogging them is a little frustrating. 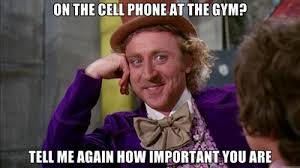 You know how all those late night exercise infomercials claim that their products can get you thin and fit in less than ten minutes, with only 3 moves, or with just three 5 minute workouts a week? Well this person, must be subscribing to that sort of logic. I’ll see him come in, hop on an elliptical, go as FAST AND AS HARD as he can on the machine (making it shake, make all sorts of noises, and basically be on the verge of breaking!) for about 5 minutes, then get off and walk out. Effective, no? Not to mention, if you’re next to him, he WILL check your level and incline and change his so it’s just a bit higher and more intense and then continue to ‘race’ you until his 5 minutes are up. Cool bro. Yes these people are a bit different or out there but overall they add some color to my gym….and they certainly keep me entertained!

Tell me about a character from your daily life…work, school, gym, or wherever you frequent often!

Hope this post brought some fun into your Monday! Enjoy the start of your week.

Todays’s Healthy Help: Offered to take the lead on finding places to donate leftover food from work every night!

Never too early to start Lending a {Healthy} Hand for this weeks round-up! Tell me what you’ve done to help someone else lately!

25 responses to “The Regulars”