Power to the potato! Long ridiculed by society as unhealthy or too high in carbs, I am here to pump up the potato and bring it back to the mainstream dinner plate! Potatoes equal energy, performance, and optimal nutrition. Read on to find out why you should be PRO-potato! 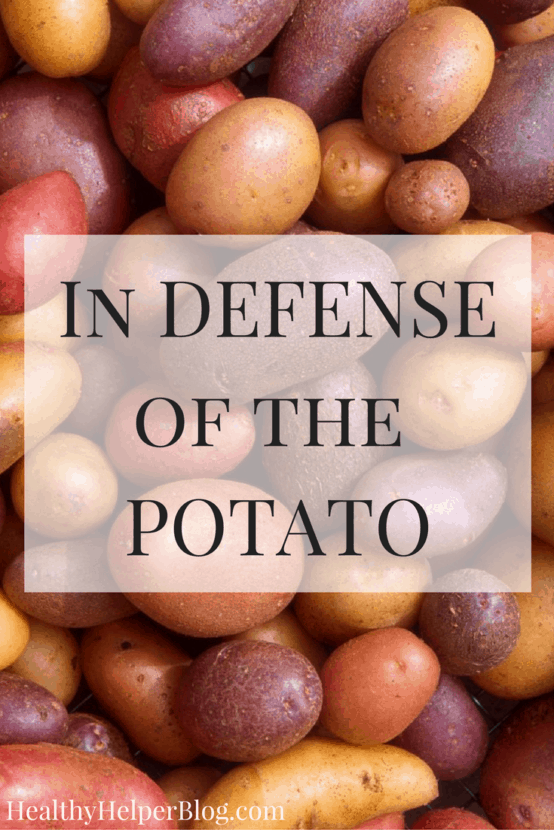 Certain foods fall in and out of demonization in our society as the years go by. MSG has had its day. Sugar’s public trial is ongoing. And even fat has been sworn off my some. But no other food more than the simple potato has been vilified in such extreme ways.

What used to be a staple of the American dinner table (and quasi ‘dinner tables’ around the world), first got blacklisted with the growth of the Atkins Diet phenomenon. It started in the 1970s with the publishing of Dr. Atkin’s book, Dr. Atkins Diet Revolution, but didn’t gain its peak of popularity until the late 1990s and early 2000s.

If you’re unfamiliar with the Atkins Diet, it is an extremist diet philosophy that labels ALL carbs as bad. The emphasis is placed on meat and fat, with recommendations to consume little to no carbs…even from healthy, complex sources.

Enter the potato. Ruled out immediately because of its high starch content, the potato fell from one of the most consumed foods in the United States to its  lowest numbers than ever before. Potato consumption fell so much that it actually hurt the potato growing industry. Even restaurants started offering low-carb, potato free dining options to keep up with the demands of the (starving) public.

Atkins died down after a while (replaced by the just as dogmatic diets of the present), but for some reason the disparagement of the potato has continued. It’s a fear food for some, a treat food for others, and totally off-limits in certain diet communities.

Well, I’m here today to stick up for the spud. To make a ‘plea for the potato‘ if you will. Let’s get to some facts…

Did you know the potato has been cultivated for more than 10,000 years? It is the most calorie productive crop on the planet and to this day yields more food energy per acre than any other crop. Whole civilizations thrived because of the potato and were able to maintain their existence due to the nutrition it provides. Unlike most agricultural crops, potatoes are resilient. In times of war they were less likely to be destroyed by invading troops (they’re tubers so they grow primarily underground) and are able to weather drought and famine conditions better than wheat. When the potato moved out of South America and penetrated Europe and the Far East, people grew in numbers and in physical size. It’s safe to say the potato single-handedly improved the health and well-being of the entire human race.

Potatoes are one of the most satiating foods on the planet

As I mentioned above, potatoes provide the most nutrition (in terms of quantity) for people on earth than any other food. But it’s not just the ease of growth and availability that makes them so appealing. They are incredibly filling! This is because of their low-calorie density. When a study was conducted on the satiating ability of a range of foods (everything from bread and yogurt to apples and beans), potatoes won out over all its competitors by far. And the good news is that you can enjoy a medium-size (approx. 5.3 ounce) potato for just 110 calories. You’d think this would be a dieters dream food…but the low-carb craze overshadowed this useful (science backed) information.

Potatoes are powerhouses of nutrition

Potatoes offer more total nutrition value per unit cost than ANY OTHER food on the planet. Aside from being a great source of quality carbohydrates, they contain high-quality protein, have a higher concentration of amino acids than whey, and have a higher ‘biological value’ than soy. They’re also rich in Vitamin C and zinc, have more potassium than bananas, and even contain antioxidants. Not to mention all the fiber in the skin (eat the skin people!)! Potatoes not only aren’t bad for you, they’re actually SUPERFOODS. In fact, in a study done by Danish physician and nutritionist Mikkel Hindehede, it was proven that one could survive only on potatoes and a bit of fat for months at a time. Not only survive in fact, but thrive.

The glycemic index isn’t everything

The invention of the glycemic index prompted the demonization of a lot of foods that were once considered healthy and whole. Anything that got ranked as high glycemic was automatically labeled as ‘bad’. People love black and white thinking so high glycemic=bad and low glycemic=good fit well with their mindsets. The glycemic index provided yet another mechanism for people to judge their food without substantiated justification. Yes, potatoes can cause a slight spike in blood sugar after consumption, but this is not inherently damaging to the body in any way. In addition, there are no long-term health defects associated with potato consumption. In fact, as previously mentioned, potatoes are a GOLD MINE of quality nutrition.

It’s all in the preparation

It’s not potatoes that are bad, it’s how they’re prepared that causes some people issues. When they’re covered in oil and fried, the nutrition they offer diminishes. Preparing potatoes with heavy amounts of oil makes them more calorie dense for a smaller serving size and thus less satiating. Still, people blame the starch in potatoes for making them ‘unhealthy’. Just like a lot of other foods, it’s the preparation that affects the nutrition. The bad reputation that Dr. Atkins bestowed on the potato was totally misplaced.

Still not convinced? Well, forget everything I’ve said, all the evidence I’ve laid out, and consider the simple fact that…POTATOES ARE GOOD.

There I said it. They’re delicious, comforting, and pretty darn fun to eat. If for no other reason, stop restricting potatoes from your diet because you LIKE them. They are real, whole foods grown straight from the earth. They are not something to be feared and in fact should be incorporated frequently for a healthy, well-balanced diet.

Needless to say, I am pro-potato! Dispel all the false taboos that surround potatoes, grab yourself any variety, and carb up!

In Defense of the Potato

Need some more convincing? PotatoesUSA is a great resource for information on the health and sustainability of potatoes. Find them on online at #BeholdPotatoes!

If you enjoyed this post, you may want to checkout my article on Mind Body Green…it’s a great follow-up to this discussion!

Do you incorporate carbs into your diet?

Have you ever been led to believe any food myths promulgated by society or diet gurus?

Linking up with TOL and JillConyers.

139 responses to “In Defense of the Potato”