They seem to have taken over social media in the past few years. I remember when I first started seeing them I really had no idea what they were. I didn’t understand the concept or what the point really was to them. But once I caught on, I thought they were pretty ingenious. A way to connect with people from all over the world, in all different time zones, who happen to be thinking or talking about the same thing that you are.

As with all good parts to social media, there are some bad parts too. And hashtags, for as much fun as they can be, can also be pretty destructive and just plain annoying. Here’s a few that I’ve seen slowly increase in popularity and misuse…..

What hashtags do you wish would go away?

#CheatClean Usually accompanied by a picture of a Quest, some weird protein concoction, or a Walden Farms laden stacks of pancakes, this hashtag is one of the worst. I am not a big believer in ‘cheats’ as it is (moderation is best in my opinion!), but if you are going to ‘CHEAT’….a Quest bar is not it! I’m sorry, but that is not a cheat. What’s the point of labeling it as such when the whole point of a ‘cheat’ is to eat something you normally wouldn’t outside of the realm of healthy, clean foods?

#PornCakes Same as above….#porncakes? What’s the point? Especially when the accompanying picture is usually of protein pancakes covered in weird protein ‘frosting’ or artificially sweetened syrups. I am a lover of protein pancakes just as much as the next person, but I’ll be the first to admit they are not real pancakes.

#ChunkPorn  Again, another reference to food as this thing to be worshipped and fawned over. I could go the rest of my life without seeing another instagram picture of chocolate chunk in a Quest bar. If you want chocolate, people, HAVE SOME! Don’t mask your cravings with protein packed fake food. And let’s be honest, how many times can we see the same picture of an unwrapped (or better yet), ‘broiled’ Quest bar?

#Fitspo  You all know I have a whole series on the dangers of ‘Fitspiration’ and even though I think it made people more aware of how misleading and unhealthy these types of images can be, I still see it all around the web! It’s sad because not only does it portray unattainable standards for people’s bodies but it makes people judgmental of where they are physically and mentally. Try to embrace what you look like and what your fitness level is. It’s different for everyone and comparison only causes more negative thoughts. 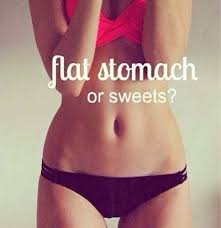 #StrongNotSkinny This hashtag probably had good intentions when it started…maybe trying to get people to focus on strength instead of thinness. But unfortunately, it seems to have gone the way of #fitspo and is now just an excuse to obsess over lifting weights, working out, and looking a certain way. Changing the words used doesn’t make the obsession with the exterior any less damaging.

#FoodBaby: Usually accompanied by an extremely skinny person who happens to have a distended stomach at the time, this hashtag really bothers me. It’s often used in by people to show that ‘hey they don’t have abs all the time’, but in reality I think it just puts more focus on people’s outward appearance and food in general. Most people don’t think about how they feel or how their body changes slightly after a meal. By thinking about this so much and actually stopping to take a picture of it, people are just causing themselves more anxiety and more things to worry about. We all eat, we all feel full, sometimes we feel a little too full….but that’s normal. Don’t allow yourself to be consumed with guilt and shame over eating just because of a feeling. Because that’s really all fullness is….a feeling. Temporary and it will pass.

#Foodgasm Food and orgasm in the same sentence? No thanks. Not what I want to be thinking about when I see a picture of your meal.

#DoYouEvenLift So what if you don’t? It seems like every fitness community out there feels the need to berate and belittle other people for not doing their specific activity. So you’re a runner? Great! You do Crossfit? Cool! You’re a super yogi? That’s awesome! You lift weights? Good for you! It’s okay to love what you do, but don’t discount other people’s passions just because they don’t match your lifestyle.

#TagsforLikes If you’re only purpose for using social media is to get a certain number of likes, shares, or comments, then you need to reevaluate your priorities. Social media is about connecting with people and developing a community. It’s about lifting others up as well as sharing your own thoughts. But it’s not all about you and your personal gain. Remember that.

I think these hashtags are way past their prime….time to move on from them and create some new ones that are more positive, more helpful, and more inspirational for the right reasons!

What hashtags do you HATE?

Are you a hashtag user?

What do you think is the most overly used hashtag?

[Linking up with TOL today!]

Never too late to start Lending a {Healthy} Hand for this week’s round-up! Tell me what you’ve done to help someone else lately!